Gilgal was the place of new beginnings. Twelve memorial stones from the Jordan were set up at Gilgal after the miraculous crossing of the Jordan River (Joshua 4:3). The nation was circumcised there in preparation for their possession of the land (Joshua 5:5). The Passover was celebrated (Joshua 5:10), and the miraculous manna ceased (Joshua 5:12). The victorious campaign in the hill country of Judea extending to Kadesh-barnea and Gaza was conducted from Gilgal (Joshua 10:15). The great battle at the waters of Merom was conducted from Gilgal (Joshua 10:43; 11:5). Saul was crowned Israel’s first king at Gilgal (1 Samuel 11:15).

Yet, the activity at Gilgal began to obscure the Word of God. Saul compromised and sacrificed at Gilgal to try to gain God’s blessing. His desire for…

The broad path is easy to find. In fact, unless you make a conscious choice to avoid it, that’s where you’ll find yourself walking. Most people like this wide road because it’s comfortable, fairly easy, and culturally acceptable.

What those who travel the broad road fail to realize is that it doesn’t lead to life. All the “promises” it gives of satisfaction and fulfillment end in disappointment because it’s a path without God.

The narrow way, however, follows the direction and desires of the Father. In Matthew 7:14, when Jesus Christ talked about our options, He said, “The way is narrow that leads to life.” And what’s the narrow way? It’s “the way and the truth and the life”—in other words, Jesus Himself (John 14:6). Those who enter by the narrow gate of faith in Christ find the peace and joy of a relationship with Him, which truly satisfies…

You do not even know what will happen tomorrow. James 4:14

Sudden change, however, is not simply a weather phenomenon. It’s sometimes the very nature of life. James reminds us, “Now listen, you who say, ‘Today or tomorrow we will go to this or that city, spend a year there, carry on business and make money.’ Why, you do not even know what will happen tomorrow” (4:13–14). An unexpected loss. A surprise diagnosis. A financial reversal. Sudden changes.

In him we have redemption through his blood, the forgiveness of sins, in accordance with the riches of God’s grace.Ephesians 1:7

Nowhere does it say in the Bible that Christians are to spend 40 days praying and fasting in the lead-up to Good Friday and Easter. Nor does it speak of an “Ash Wednesday” or “Holy Week”.

So why do so many churches mark the Lenten period, which begins on Ash Wednesday and ends in the Holy Week?

And why think about this, when we are struggling with many other challenges—such as the COVID-19 outbreak—now?

In case you’re wondering, Lent is a season celebrated by many of the more traditional or liturgical churches. During this season, believers prepare for Good Friday by putting a greater emphasis on repentance and self-denial as they reflect on Christ’s death and resurrection. Typically, it involves fasting or giving up some luxuries, and a…

February 26th, Happy Birthday to Me

In a real-world with we would have Supreme Court Justices who followed the U.S. Constitution when rendering their decisions.

All with the deftness of a cat running in a room filled with robotic rocking chairs.

She made the speech not because she meant it, but she knew she had backed her way into a corner, in which there would likely be no return.

That is not the case with SupremeCourt Justice, Sonya Sotomayor.

Obama needs to get lost!

An alert Senate Judiciary Panel would have ripped the rug out from her quest to sit on the highest court of the land when she said: “Race would be considered in her decisions.”

But Republicans at the time, including the RINO Lindsey Graham, said he would never block a choice for the Supreme Court, clearly showed his ignorance in this particular situation.

You probably don’t know the name but he was a very important person as you will learn.
Mr. Haney was one of the initial employees at the Department of Homeland Security, which was formed in November of 2002,  working as an analyst, searching for information on enemies of America. And a fine job he did, connecting the dots between individuals involved in terrorist networks and organizations.  He was making great progress until 2009 when Barack Obama was installed as president. Mr. Haney was instructed at the direction of our freshly minted chief executive to scrub all the muslim names from his research archives.  Was this due to political correctness run amok or was there a more nefarious motivation for that act?

Phil Haney exposed Barack Obama’s administrators abetting the Muslim Brotherhood by purging their Dept of Homeland Security intelligence records, as delineated in his book, “See Something, Say Nothing.”

Sadly, life is cheap in America these days. The preservation of human life is no longer a primary value in contemporary culture, in spite of our Judeo-Christian heritage, which teaches us to value human life. What of the ongoing slaughter of unborn, innocent babies for reasons of uninhibited pleasure and personal and family convenience? No wonder Pope John Paul II in his encyclical proclaiming a gospel of life is constrained to describe modern culture as a “culture of death.”

Jesus said that when a sparrow falls to the ground, God notes it. The birds of the air are incredibly precious to God. He made them. And ours would be a visually tedious and eerily silent world without them. The created universe and this beautiful planet of ours are of inestimable worth to God and therefore should be treasured.

Having said that, let us be clear: Precious as all… 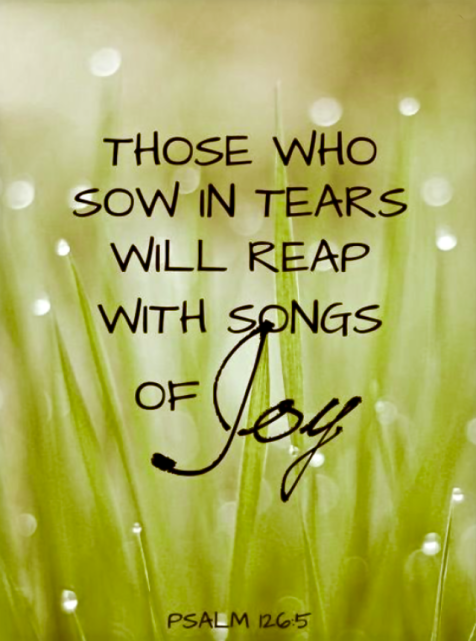 Rejoice in the Lord always. I will say it again: Rejoice!  Philippians 4:4

In What We Keep, a collection of interviews by Bill Shapiro, each person tells of a single item that holds such importance and joy that he or she would never part with it.

This caused me to reflect on the possessions that mean the most to me and bring me joy. One is a simple forty-year-old recipe card in my mom’s handwriting. Another is one of my grandma’s pink teacups. Other people may value treasured memories—a compliment that encouraged them, a grandchild’s giggle, or a special insight they gleaned from Scripture.

What we often keep stashed away in our hearts, though, are things that have brought us great unhappiness: Anxiety—hidden, but easily retrieved. Anger—below the surface, but ready to strike. Resentment—silently corroding the core of our thoughts.

The apostle Paul addressed a more positive way to “think” in…

They looked to Him and were radiant.  Psalm 34:5

One Sunday the powerful Scottish preacher, Alexander Maclaren, spotted a well-known skeptic in the audience. The man attended several Sundays and made a profession to receive Christ as his Savior. Maclaren asked which message had brought the man to that decision. “Your sermons, sir, were helpful,” replied the man, “but they were not what finally persuaded me to become a Christian. A few weeks ago as I was leaving church, I noticed an elderly lady with a radiant face. Because she was making her way with difficulty along the icy street, I offered to help her. As we walked along together, she looked up at me and said, ‘I wonder if you know my Savior, Jesus Christ? He is everything in the world to me. I want you to love Him, too.’ Those few words touched my heart, and when I…