Well July sure came up on us fast and here we are at one of the most important Patriotic Holidays of them all!

Let me take a moment to say Thank You and God Bless to ALL the Men and Women of the Armed Forces and to all the Troops deployed into harms way all over the World right now….THANK YOU for standing in the Breech for all of us civilians who are at this very moment ENJOYING all the benefits of what you are fighting for!

And to all the Anti-American, Spineless Liberal Marxist out there who seem to take every opportunity to show Disrespect to our Flag and Nation, PLEASE make this the day you remove your head from your own butt.

America is Tired of listening to you flap your gums.

We are less free than at any point in our history (slavery excluded of course). Sure, we’ve made some great strides in our regards to civil rights, especially recently.

But our society is more dependent on the State, by far, than we ever have been. We’ve long ago stopped having a government of, by and for the people. And the polity has welcomed it with open arms, in the name of convenience and submission.

That said, I would rather live in, and give service to, no other nation as this.Maybe we’ll get it right someday…..

We are less free than at any point in our history (slavery excluded of course). Sure, we’ve made some great strides in our regards to civil rights, especially recently.

But our society is more dependent on the State, by far, than we ever have been. We’ve long ago stopped having a government of, by and for the people. And the polity has welcomed it with open arms, in the name of convenience and submission.

That said, I would rather live in, and give service to, no other nation as this.Maybe we’ll get it right someday…..

I know, a lot of people nowadays just say ‘Happy 4th of July!’, but that doesn’t remind us why we celebrate this day.

We celebrate the day that a group of people declared to the world that Government had certain limits, and that when any government overstepped its bounds, that it…

Amazon/online is not the problem … but I feel more middle class than I have in years . I can save and buy .. or is it just because I have no man ha ha
…………

“The middle is disappearing — low and middle-income customers increasingly shop at discounters and dollar stores, forcing retailers that once served these customers, like Bon-Ton and its subsidiary brands, to close shop,” analysts from intelligence firm Gartner L2 wrote in a recent report on department stores.

The slow decline of the middle class in America has had an impact on retailers that haven’t adapted to the change. Increasingly, the most successful businesses in the sector have become more distinctly split into two sections: luxury and budget stores.

Most nations have regions that are unique and known for their special qualities. For example, France has its wine country and Mediterranean coast, Germany has castles along the Rhine, Switzerland has ski resorts in the Alps, and Italy and Greece have ruins from centuries past. What makes them nations, however, is the commonality of language and culture that unites their citizens regardless of political or philosophical differences.

We used to have that unity in America, when our nation was a true “melting pot”. Legal immigrants added the flavors of their nationality to the mix but swore allegiance and loyalty to America not their country of origin. They learned English and American History, and proudly sang “Oh say can you see . . .” standing and saluting the flag, not burning it or taking a knee.

Our nation is now seriously and purposefully divided along geographical and philosophical lines, a repeat of the conditions, motives, and political treachery that existed in our young nation between 1828 and 1860. And the results were disastrous.

The MP34, the Beretta 38A, and the MP40 submachine guns represent very different design philosophies. Each gun was effective, but the MP34 and 38A were ultimately unsustainable. 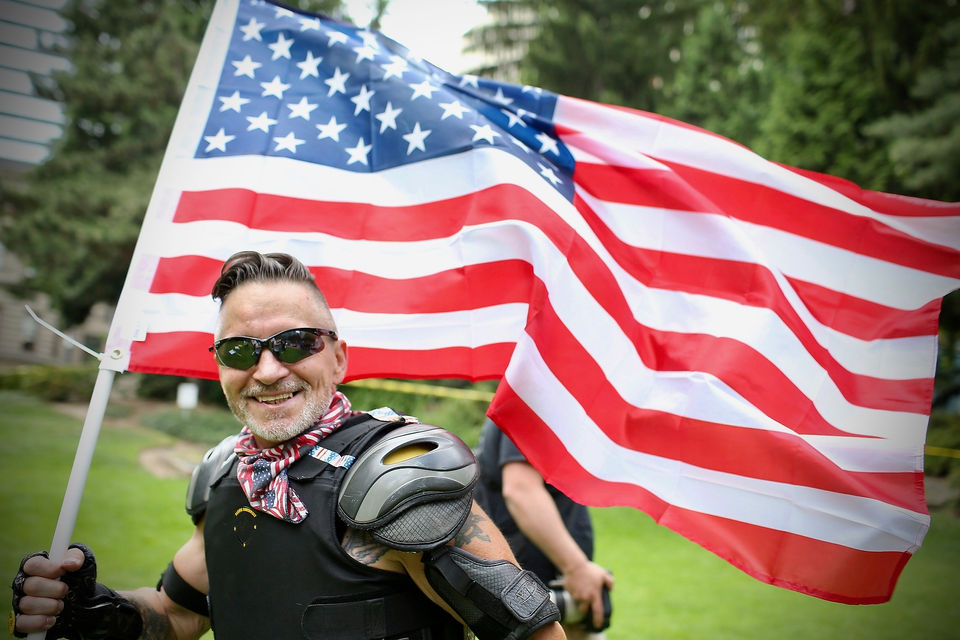 “Portland Police declared a riot Saturday after tensions between the right-wing Patriot Prayer group and local anti-fascist activists came to a head and broke out in violence.

The afternoon began with a permitted rally at Terry Schrunk Federal Plaza organized by Joey Gibson, U.S. Senate candidate for Washington and leader of the right-wing, Vancouver-based group.

A counter-demonstration by masked local anti-fascist groups gathered nearby among a heavy police presence. Officers seized weapons such as utility knives, clubs and chemical sprays, detaining several protesters early on”

“Things turned ugly shortly after 6 p.m., when Patriot Prayer protesters spilled into Third Avenue to begin their permitted march through the streets of Portland.

Veteran Leftist Andres Manuel Lopez Obrador has been elected president of Mexico, winning the largest landslide in his country’s recent history in a remarkable routing of what he terms “the mafia of power”.

Promising to combat corruption and drive down record crime rates, Mr Lopez Obrador captured 53 per cent of the vote, according to preliminary results – a historic victory for the party he created.

Voters decided in their millions to turn their backs on the two parties which have ruled Mexico for almost 100 years, and finally give him a chance – sending his supporters into a frenzy.

Boy, they are real tough guys when they are pushing and bossing women around. When they are completely in control and have the upper hand they sure do show their ass.  But the problem here? That is the description of a typical bully. And that is what most of them are. They have more in common with thugs and wife beaters than the common citizen.       Look at the coward that sat outside the Broward Florida school while children were being mowed down. I am sure that when he was in complete control of the situation he was a real hard ass, swaggering around with his vest and gun.    But without back up and 40 other cops…… He was just a frightened bully that was too afraid to act.