Ken Kachigian, the speechwriter who wrote Ronald Reagan’s first inaugural, said he got the assignment in November, had his first meeting with Reagan in mid-December and wrote a rough draft over the holidays.

“It would be a pretty good idea for him to have a draft on Trump’s desk right after the New Year,” Khachigan advised Miller. “It’s exciting. It’s stressful. It’s a high bar. The most important thing is you don’t want to let the president down.”

One sub-drama is whether Trump will use a teleprompter. He bashed the devices on the trail for months during the primaries — suggesting they be outlawed at one point — only to begin using them at almost all his rallies late in the general election.

Reagan was the last president not to have used a teleprompter for an inaugural address.

Make sure you are on the wrong side of right!

What is a right? Do rights exist? They seem so intangible, yet philosophical constructs can be real.

A right simply defines a state of being; it describes a condition. “Right of way,” is how we describe who has precedence in a driving situation. That certainly doesn’t mean people can’t ignore the concept of right of way, it just serves as a tool for establishing who is liable if a car accident should happen.

The American people and the Jewish people in particular; have long memories.
AMEN

I thought about attempting to explain this point about the UN “Christmas Surprise” where the US government ambushed the Israeli government — but I think everybody knows how I feel, so here is a take on it from Alan Dershowitz, one of the smartest guys in the world.

But no darkness lasts forever.Two thousand years after the Jews had come to believe that wars were for other people and miracles meant escaping alive, Jewish armies stood and held the line against an empire and the would be empires of the region.And now the flame still burns, though it is flickering. Sixty-eight years is a long time for oil to burn, especially when the black oil next door seems so much more useful to the empires and republics across the sea. And the children of many of those who first lit the flame no longer see the point in that hoary old light.

But that old light is still the light of possibilities. It burns to remind us of the extraordinary things that our ancestors did and of the extraordinary assistance that they received. We cannot always expect oil to burn for eight days, just as we cannot always expect the bullet to miss or the rocket to fall short. And yet even in those moments of darkness the reminder of the flame is with us for no darkness lasts forever and no exile, whether of the body of the spirit, endures. Sooner or later the spark flares to life again and the oil burns again. Sooner or later the light returns.It is the miracle that we commemorate because it is a reminder of possibilities. Each time we light a candle or dip a wick in oil, we release a flare of light from the darkness comes to remind us of what was, is and can still be.

What Churchill loved was power, and the opportunities power provided to live a life of drama and struggle and endless war.

Yet, in truth, Churchill never cared a great deal about domestic affairs, even welfarism, except as a means of attaining and keeping office. What he loved was power, and the opportunities power provided to live a life of drama and struggle and endless war.

There is a way of looking at Winston Churchill that is very tempting: that he was a deeply flawed creature, who was summoned at a critical moment to do battle with a uniquely appalling evil, and whose very flaws contributed to a glorious victory — in a way, like Merlin, in C.S. Lewis’s great Christian novel, That Hideous Strength.169 Such a judgment would, I believe, be superficial. A candid examination of his career, I suggest, yields a different conclusion: that, when all is said and done, Winston Churchill was a Man of Blood and a politico without principle, whose apotheosis serves to corrupt every standard of honesty and morality in politics and history.

This is a long but very interesting article about the “real” Winston Churchill. From Ralph Raico at lewrockwell.com:

[This essay originally appears in The Costs of War: America’s Pyrrhic Victories, edited with an introduction by John V. Denson.]

When, in a very few years, the pundits start to pontificate on the great question: “Who was the Man of the Century?” there is little doubt that they will reach virtually instant consensus. Inevitably, the answer will be: Winston Churchill. Indeed, Professor Harry Jaffa has already informed us that Churchill was not only the Man of the Twentieth Century, but the Man of Many Centuries.[1]

In a way, Churchill as Man of the Century will be appropriate. This has been the century of the State — of the rise and hypertrophic growth of the welfare-warfare state — and Churchill was from first to last a Man of the…

Bet you didn’t know we are a Muslim majority nation With just 28 days left before President-elect Donald Trump assumes office, Barack Obama obsessively flexes his muscle with yet another administra…

Source: Obama kicks America in the teeth on his way out the door | Seeing Red AZ

At some point, people get tired of being murdered. The young German with a taste for politics is going to start to question why he is loyal to people, who show more concern for foreigners than they do for him. A lesson of the French Revolution is that once people begin to question the legitimacy of the system, everything is soon up for grabs. The reckless disregard for their duties, by people like Merkel, is planting the seeds for something much worse than the monthly Exploding Mohamed we see in the news.

Whether or not it is too late to save Europe is open for debate. It is also possible that more sober minded politicians will rise up, push aside the reckless and begin the task of rebuilding their countries. The future is not written and there is no such thing as the tide of history. Even so, it appears Europe is headed for a very ugly and perhaps bloody reckoning. No society can last when its rulers are perpetually at war with its people and that is what Europe is today. At some point, the people will join the war.

There was no holiday for the U.S. military in the Mideast as airstrikes against ISIS terrorists continued on Christmas Eve.The Defense Department announced Sunday there were 12 airstrikes against the Islamic State of Iraq and the Levant over the preceding 24-hour period under Operation Inherent Resolve.Attack and fighter aircraft conducted nine strikes in Syria:Near Ar Raqqah, nine strikes engaged eight ISIS tactical units, destroyed seven fighting positions and a tunnel, and suppressed an ISIL tactical unitBomber and fighter aircraft conducted three strikes in Iraq, coordinated with and in support of Iraq’s government:Near Al Huwayjah, a strike engaged an ISIS tactical unit, destroyed four buildings and two tunnelsNear Al Qaim, a strike engaged two ISIS car bomb factories and a weapons storage facility

Source: No Holiday for Military as Campaign Against ISIS Continues – Times of San Diego

This is the man criticizing North Carolina and calling it Nazi and hating on McCrory and Republicans. Tells me I am on the “right” side!

Democrat’s Muslim Congressman forced to back out of headlining terror-linked Muslim conference taking place during Christmas. 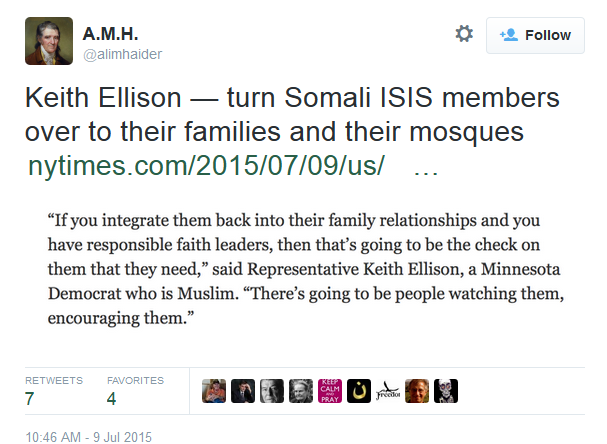 Russia did it! I felt safer when the liberals thought Bush did everything 😦