So the next line of questions is, where will the post-election violence start, how far will it spread, how long will it last, and will the lame duck 0bama decide to go all heavy with the ‘Top Down” aspect of the Saul Alinsky program, and crush the more excitable elements of the ‘Rainbow Coalition’ which was so carefully crafted and attached to candidate Clinton?Interesting times.Interesting times, indeed.

You do not have enough ammo, food, water, fuel, or medical supplies.Welcome to the Jungle…

Source: Hillary Is Going Down, And She Knows It | NCRenegade

* In documents disclosed to Citizen Researcher Dr. Larry Kawa by the US State Department, Huma Abedin signed a Non-Disclosure… 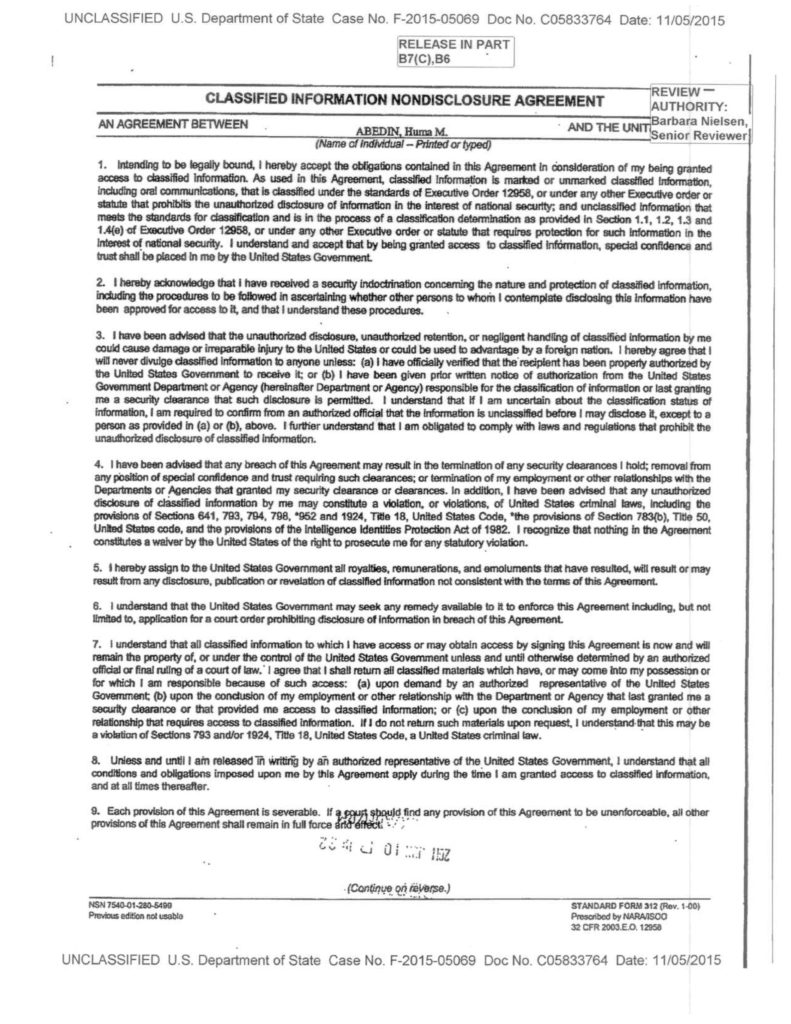 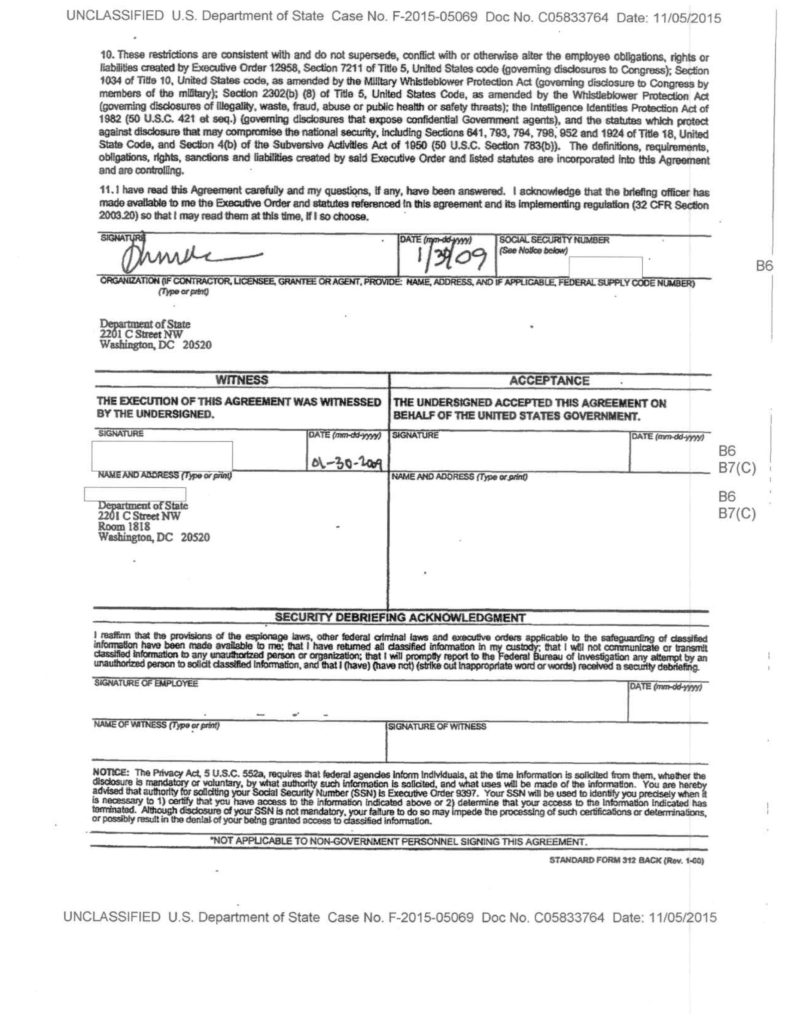 It is past time that Lynch step down! #Treason

The Foreign Agents Registration Act (FARA) was enacted in 1938. FARA is a disclosure statute that requires persons acting as agents of foreign principals in a political or quasi-political capacity to make periodic public disclosure of their relationship with the foreign principal, as well as activities, receipts and disbursements in support of those activities. Disclosure of the required information facilitates evaluation by the government and the American people of the statements and activities of such persons in light of their function as foreign agents. The FARA Registration Unit of the Counterintelligence and Export Control Section (CES) in the National Security Division (NSD) is responsible for the administration and enforcement of the Act.The Attorney General to report every six months to the Congress concerning the administration of FARA, as well as the nature, sources and content of informational materials disseminated and distributed by agents of foreign principals registered under the Act.This last report filed online covers the administration and enforcement of FARA for the six months ending June 30, 2015. So Loretta Lynch has missed two reports to congress or they have not posted the reports online.–00–Trump made a point of saying the foreign donations through registered agents needs to be revised.  I agree.Just think how much reciprocity these foreign donors will expect during her presidency if this is a verified email document.The missing FARA reports makes me wonder if there is a reason they have not been posted online or presented to congress.–Uriel–

Source: Podesta Leaked Email – Any Doubts On Sale of US To Foreigners Put To Rest – ‘Nox & Friends

I am glad Robert is an “Independent Writer” and shares his thoughts so well as many times they are the thoughts of everyday Americans without the ability to put the words together so well (like me).
Always remember and never forget, electing Trump is not the end all. There is much work ahead. The road is long and hard and for many there will need to be a change in thought process. Don’t get left behind! #MAGA
———————–
America is headed for difficult times. Most Americans who aren’t drawing a paycheck from Silicon Valley, Hollywood, Wall Street or Washington know this. Do the majority pull the handle for independent, accomplished, and vigorous, or incompetent, corrupt, and sickly? In the privacy of mail-in balloting or the voting booth, a surprising number will choose the former, regardless of what they’ve told family, friends, and pollsters. Trump looks like a winner. Sunday night my son and I attended a Donald Trump rally in Albuquerque. The rally was in a huge aircraft hangar next to the airport. The local paper said there were 4,000 people, but that seems like an underestimate; the hangar was packed. That Trump would campaign in New Mexico nine days before the election is significant. New Mexico is a majority Hispanic, reliably Democratic state. The trip was hastily arranged, but Trump wouldn’t have made it if he thought New Mexico was out of reach. He said a poll showed him in a dead heat. The state has only five electoral votes. It seems reasonable to assume that he must feel fairly comfortable about his prospects in the big swing states if he’s taking time away from them to visit New Mexico.

There were a few peaceful protesters, some of whom were dressed in clown suits. Trump supporters are… 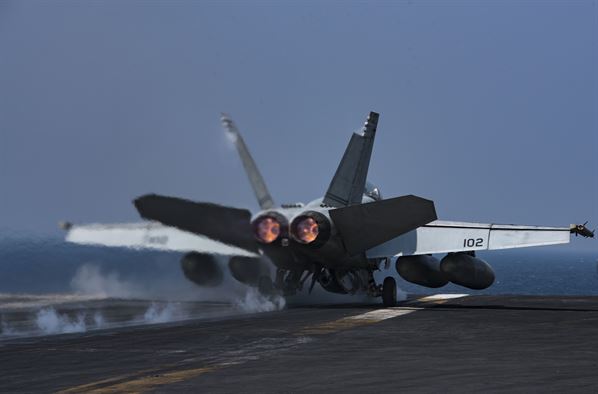 The training was designed to simulate real-world scenarios the ship may encounter at sea.The exercise consisted of multiple platforms from both branches, including guided-missile cruisers USS San Jacinto (CG 56) and USS Monterey (CG 61), guided-missile destroyer USS Hopper (DDG 70), and the squadrons of embarked Carrier Air Wing (CVW) 3 aboard Ike.”The exercise was a big accomplishment,” said Lt. Anand Jantzen, the San Jacinto’s fire control officer and liaison officer aboard Ike. “Not only was the strike group still conducting our primary mission supporting Operation Inherent Resolve, but we also directed a joint exercise simultaneously.”T

he Air Force provided two big-wing tankers and two F-22 Raptors from the 525th Expeditionary Fighter Squadron to support 13 aircraft from the Ike CSG. During the exercise, both forces were utilized and divided into “red air” hostile threats and “blue air,” the strike group’s air defense force.The air support provided by the red and blue air allowed a simulation of actual engagements and an opportunity to train in scenarios, which created a challenging environment. The aircrews were able to work on their proficiency and meet different mission objectives.”We were able to exercise the full Ike CSG capability and integrate that with the Air Force,” said Lt. Cmdr. Tommy Kolwicz, the Strike Fighter Squadron (VFA) 86’s operations officer. “We had full integration from the fighters in the air to the tactical actions officers and watchstanders on the surface ships.”Red air’s objective was to overwhelm the CSG’s air defenses with simulated air-to-surface missiles. Aircraft flew missile profiles towards the surface ships so they could practice going through pre-planned responses and simulate shooting down anti-surface missiles.

You will never get a clearer view into exactly what the (D)emocratic party is all about, than you are getting right now:  Debbie Wasserman-Schultz, Huma Abedin, Cheryl Mills, John Podesta, Donna Brazile, Terri McAuliffe, and of course the candidate herself, Hillary Clinton.

They are all filthier than a 6-year old coming out of a mud pit; there is not a crime that they have not committed; nor a pillar of our Nation upon which they have not publicly urinated, at this point.  And they have been doing it this way for at least the last 50 years.

Source: Democrats: It’s Not What They Do, It’s Who They Are | NCRenegade

I enjoy this author but that often means I do not agree with what he has to say! Case in point …

He (Trump) doesn’t have to do anything to advance the interests of white working people because it is sufficient that he claims to be able to protect them from Muslim terrorists, Mexican immigrants and black criminals.     …

I have the ability to protect myself — and a Trump election ensures I will continue to have that right!

So long as a critical mass of us Americans are motivated primarily by fear of each other, we’re not going to get anywhere.

It isn’t just Canada folks. This is right here in America they are draining our welfare – why are the suppressed people (blacks) not pissed about this? They are taking away from AMERICANS!!

Back in 2008, Toronto media left and right reported on hundreds of polygamous Muslim families in Toronto, many on welfare. Has anything changed? Neither Canada’s government nor its welfare agencies bother to screen for polygamous marriages. And the media won’t breathe a word about it.

Source: Do Canadian taxpayers know they are funding welfare for polygamous Muslim migrant families with up to 4 wives and countless children? – BARE NAKED ISLAM

The United States is not in danger. The Empire is. This is not good. Empires, the Soviet Union notwithstanding, seldom go quietly. Either Washington gambles on war of some sort against Russia, or Russia and China, in the desperate hope of reversing things, or the Empire gets slowly eaten. Or not so slowly. Once one country pries itself loose, many may rush for the door.

This is why the American election actually matters, unusual in Presidential contests. It is Blowhard against Corruption, a swell choice, but Trump is firmly against war with Russia, and Hillary for. Her military understanding is that of a fried egg.

We have not reached the end of the American empire, but we’ve reached the beginning of the end. From Fred Reed at fredoneverything.com:

Oh good. The world reaches a crossroads, or probably a road off a cliff, just when I want to relax and watch gratuitous violence on the tube. To judge by the rapid drift of events aboard our planetary asylum, the talons of Washington and New York on the world’s throat are fast being pried a-loose. The Global American Imperium is dying. Or so it sure looks anyway.

I say talons of “New York and Washington” because America’s foreign policy, forged in those two cities, belongs entirely to them. Americans have no influence on it. Further, none of of what the Empire does abroad is of any benefit to Americans. Do you care at all what happens in Afghanistan, Iraq, Yemen, or the South China Sea? Do you…

He is just spitting out rhetoric he has already heard without doing any research. Idiot abound.