A lot of interesting data. One point is that more blacks are worried about crime? Does BLM know this? 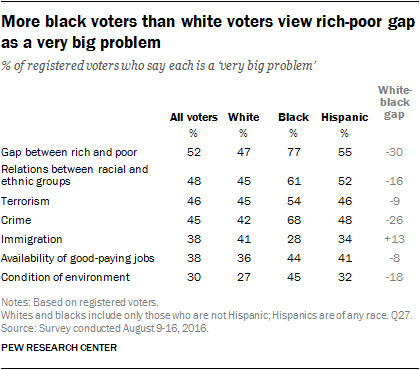 During the presidential primaries, Clinton supporters were prone to downplay the importance of economic inequality.

Black people, they said, were only concerned about racism and racial discrimination, not the gap between rich and poor.

But a Pew Research Center survey indicates that economic inequality is in fact the top issue among African American voters.

The survey indicates that 77% of American black voters view the gap between rich and poor as a very big problem, followed by crime (68%), with relations between racial and ethnic groups coming in third (61%).

Black Americans are much more concerned about crime than white Americans, which should not be surprising, because, as a group, they are much more likely to be victims of crime.

Interestingly, black Americans are less worried about immigration than white Americans, or even Hispanic Americans, are.

There have been countless stories here about the thousands of illegal alien Muslim savages squatting in Calais and attacking cars and trucks with bats and axes, demanding to be taken into England, …

Source: WARNING! Never drive through Calais, France unless you have a firearm, and are prepared to use it – BARE NAKED ISLAM

The United States has decided to spend many billions of dollars on the CVN-78 (“Ford”) class of aircraft carriers to replace the venerable Nimitz class. The latter has served the U.S. Navy since 1975, with the last ship (USS George H. W.  Bush) entering service in 2009. The Fords could be in service, in one configuration or another, until the end of the 21st century.Just as the U.S. government has determined to make this investment, numerous analysts have argued that the increasing lethality of anti-access/area denial systems (especially China’s, but also Russia and Iran) has made the aircraft carrier obsolete.  If so, investing in a class of ships intended to serve for 90 years might look like a colossal waste of money.As with any difficult debate, we should take time to define our terms, and clarify the stakes. The anti-access/area denial (A2/AD) systems around the world may indeed curb the effectiveness of the Ford class, but the U.S. will still find uses for this ships.Define Obsolete:We need to carefully describe how we think about obsolescence. Military analysts often equates obsolescence with uselessness, especially while pursuing dollars for new gadgets, but the two words don’t mean the same thing. In every war, armies, navies, and air forces fight with old, even archaic equipment.  Built for World War II, the A-26 Invader attack aircraft served in the Vietnam War.  The USS New Jersey, declared obsolete at the end of World War II, fought off Korea, Vietnam, and Lebanon.  The A-10 “Warthog,” thought by many to be obsolete before it even flew, continues to fight in America’s wars.  For countries less well-endowed than the United States, the point hold even more strongly; all of the armies currently fighting in Syria and Libya use equipment that the U.S. considered obsolete decades ago.The point is that even if the ships of the CVN-78 class cannot penetrate advanced A2/AD systems, they can still serve other useful purposes.  Indeed, American carriers since 1945 have entirely earned their keep on these other missions, which include strike in permissive environments, displays of national power and commitment, and relief operations.  “Obsolescence” for one kind of mission does not imply uselessness across the range of maritime military operations.

The elimination of Abu Muhammad Al-Adnani from the battlefield would be a significant blow to the Islamic State of Iraq and the Levant, Pentagon Press Secretary Peter Cook said today.The coalition targeted Adnani in a strike yesterday near Al Bab, Syria, Cook told reporters at a Pentagon press briefing. Officials are still assessing the results of that precision action, he said. An F/A-18E Super Hornet launches from the flight deck of the aircraft carrier USS Dwight D. Eisenhower in the Arabian Gulf, Aug. 8, 2016. The Super Hornet is assigned to Strike Fighter Squadron 105. Navy photo by Petty Officer 3rd Class J. Alexander DelgadoThe coalition had been actively looking for Adnani for some time, he said.”This is someone who has been a senior leader in ISIL,” Cook said. “He’s been responsible for ISIL’s external plotting and directly responsible for recruiting foreign fighters.”The ISIL senior leader was a spokesman for the terrorists, and was responsible for encouraging attacks against civilians and military personnel in the West, Cook said.”His elimination would be a significant blow to ISIL,” Cook said, as well as a “significant blow to ISIL’s leadership.The terrorist’s demise also would constitute “a significant step in reducing ISIL’s ability to conduct external attacks outside of Iraq and Syria,” the spokesman added.Successful Precision StrikesPrecision strikes are a key part of the campaign to defeat ISIL, Cook said. The coalition has been focused on and very successful at these strikes over the last months, he said.”We’re going to continue to target ISIL leaders as we have, because we think it has taken a toll on the organization as a whole,” Cook said. “It’s an important means by which we can weaken ISIL and we’re going to continue to do that.”Cook said he had no information to support a Russian claim that its forces had carried out a strike against Adnani.Regarding the Russian claim, Cook said he wasn’t “going to wager a guess as to why they might have a motive to engage in this and to discuss this and maybe it’s just a misunderstanding on their part.”

This man is someone we should be very afraid of – he is over the top!

“… said that Kim Jong-un had found fault with the 63-year-old deputy premier’s “disrespectful posture” during a meeting that Mr. Kim oversaw in late June.”

The North Korean leader, Kim Jong-un, has executed his deputy premier for education and purged two other senior officials, sending them to re-education camps, the South Korean government said on Wednesday.Jeong Joon-hee, a spokesman for the South’s Unification Ministry, said at a news briefing that the South Korean government had used various means to confirm the execution of Kim Yong-jin, the deputy premier, and the purge of Kim Yong-chol, the head of the United Front Department of the ruling Workers’ Party, which handles relations with, as well as spying operations against, South Korea. Choe Hui, a deputy chief of the party’s Propaganda and Agitation Department, was also banished for re-education, Mr. Jeong said.

Mr. Jeong provided no further details, including when the reported punishments were believed to have taken place or how South Korea had learned of them.

But in a later briefing, a senior Unification Ministry official, who spoke on the condition of anonymity to discuss intelligence matters, said that Kim Jong-un had found fault with the 63-year-old deputy premier’s “disrespectful posture” during a meeting that Mr. Kim oversaw in late June.

A subsequent investigation found the deputy premier to be an “anti-party reactionary” guilty of “modern-day factionalism,” and he was executed by firing squad in July, the official said.

Kim Yong-jin would be the highest-ranking official known to have been executed since 2013, when North Korea confirmed in a rare announcement that Kim Jong-un had executed his own uncle and No. 2 official, Jang Song-thaek, on charges of factionalism, corruption and plotting to overthrow his government.The ministry official who spoke on the condition of anonymity said that Kim Yong-chol, the leader of the United Front Department, had spent a month at a re-education camp on suspicion of abuse of power and that he had been released in mid-August.Kim Yong-chol is seen as a hard-liner by South Korean officials. He was accused of helping orchestrate recent armed provocations by the North along the inter-Korean border, including an artillery barrage against a South Korean island in 2010, when he was the army’s intelligence chief. The Unification Ministry official said Mr. Kim would now need to prove his loyalty, which the official said raised the possibility that the North could take more aggressive actions toward South Korea.Since taking power in 2011, Kim Jong-un has frequently reshuffled the party and military elites as he has consolidated his authority in North Korea, which his family has ruled for seven decades. Mr. Kim has also executed dozens of top officials in what President Park Geun-hye of South Korea has called a “reign of terror,” according to South Korean intelligence officials.

Hawaii faces a rare threat this week, and a possible preview of climate change: Two hurricanes — Madeline and Lester — are expected to pass very close to the islands in quick succession…

Source: One Hurricane Is Rare In Hawaii, And The State Might See Two This Week | FiveThirtyEight 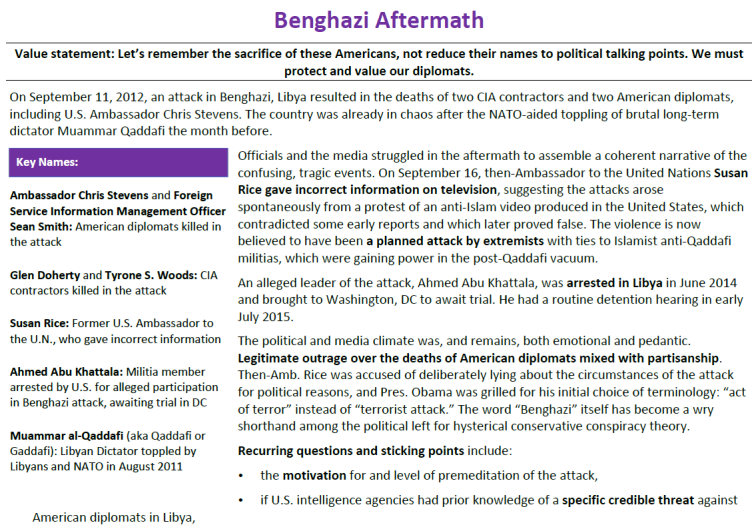 Hi everyone As you see I’ve been gradually posting DCCC docs on different states. But besides that I have a folder from the Nancy Pelosi’s PC and I’d like to share some docs from …