“The only losers anyone can see are the women who are lulled into thinking they are undergoing a safe procedure in a sanitary medical environment. When in fact they are the subjects of unregulated abortionists in uninspected and often unsanitary abortion mills where millions of children die and millions of dollars are made for the industry of death that has decimated entire generations of Americans. Not only do all the babies die but so do some of the women. Of course you will never hear that from the Corporations Once Known as the Mainstream Media because today the back alley has become Main Street, and we can’t allow these right wing conspiracy nuts to interfere with the right to kill babies. That would violate the Constitution. Maybe it is a suicide pact after all.”

Abortion mills are not required to meet health standards as high as veterinary clinics yet when Texas passes a law requiring them to meet minimum standards for any health establishment the Supreme Corruption rules this is too much.

It is the opinion of the Legalist Illuminati that we have progressed past anything as quaint as constitutional rights, such as the right to life without which the right to liberty and the pursuit of happiness doesn’t have any meaning.  Then again according to the Apex of the Esquire Class the Constitution always and only means what the Supremes say it means.

According to Richard A. Posner who is a judge, U.S. Court of Appeals for the 7th Circuit, and a senior lecturer at the University of Chicago Law School “I see absolutely no value to a judge of spending decades, years, months, weeks, day, hours, minutes, or seconds studying the…

I stand behind you in line at the store with a smile on my face, a gun under my shirt, and you are none the wiser, yet you are safer for having me next to you. I won’t shoot you. My gun won’t pull it’s own trigger. It is securely holstered with the trigger covered. It can’t just go off. However, rest assured that if a lunatic walks into the grocery store and pulls out a rifle, I will draw my pistol and protect myself and my family, and therefore protect you and your family. I may get shot before I can pull the trigger… but, I won’t die in a helpless blubbering heap on the floor begging for my life or my child’s life. No, if I die, it will be in a pile of spent shell casings. I won’t be that victim. I choose not to be. I REFUSE to be. As for you, I don’t ask you to carry a gun. If you are not comfortable, then please don’t. But, I would like to keep my right to choose to not be a helpless victim. There is evil in the world and if evil has a gun, I want one too…
Copy and paste if you believe this.

America will need to regain complete Sovereignty from even our “allies” to just getmthriugh the turmoil coming to the financial world.
….
” This blueprint didn’t magically appear in the wake of the Brexit and word of the continental army has leaked out before. This is how the globalists operate; they connive, lie and cheat from the shadows, seizing opportunities as they create them or as they present themselves. They act in defiance of the will of the people because that is what is in their own exploitive best interests.

This has been part of the grand scheme from the beginning, under the UN. The continental super-state is to be followed by a single global government. The names and geography are different but the scheme is the same for us with the North American Union. This is most definitely evidence of the conspiracy and proof that it is much more than a theory.

It’s an active plot and those who dismiss it as silly fantasy are either naïve, uninformed or in on the plot. As the ranks of those becoming informed will certainly now be increasing with this revelation, it’s going to become much easier to determine who is the treasonous globalist and much harder for them to hide.”

There is a difference in tolerating and allowing destruction … America allows immigrants to destroy our waymof life instead of requiring immigrants to assimilate,.
” Unlike the Americans and Europeans, however, China got one taste of black rioting and they decided to crack down on migrants in 2013 with the Exit-Entry Administration Law. And now they launch a “beautification” of their city. A brilliantly subtle plan on the part of the Chinese with a clever and funny name.”

American Renaissance shares a CNN article that bemoans the exodus of African migrants from China:

Emmanuel Ojukwu, the self-proclaimed Head of Africans in China, and the ambassador of the Nigerian community — one of the largest African groups in Guangzhou — is despondently spread out on a sofa inside a clothing warehouse, where the halls are eerily devoid of customers.

“So many people went home at Christmas and did not return,” he says.

The true scale of the African population in Guangzhou is hard to ascertain due to the itinerant nature of many traders — some enter and exit the city multiple times per year — and the thousands who overstay their visas.

Castillo believes the Chinese government itself has no accurate idea of the African population’s size, although at the height of the Ebola crisis in late 2014, it said just 16,000 Africans…

“… one thing I know for sure, the American people who support Trump do not find his policies controversial. They like his stand on the things I wrote about. And those who support him do so passionately because they are so fed up with us bowing to the liberal mantra. Dems\Commies and Republicans alike hate these policies because most of them are globalists. There is no difference between the two parties.
Trump supporters like Trump wanting to put Americans first. What great change that would be! Change we can believe in and like.
Is putting Americans first controversial? I welcome this “controversy”.”

The ADEX portion required communication between participating ships and aircraft in order to share tactical data and carry out a safe exercise.

“All units in the carrier strike group must work together to maintain the recognized air picture,” said Lt. Mathew Rechkemmer, air and missile defense commander’s liaison officer to Ike CSG. “Our mission is to ensure all ships and aircraft are ready to defend themselves and protect the aircraft carrier at all times.” 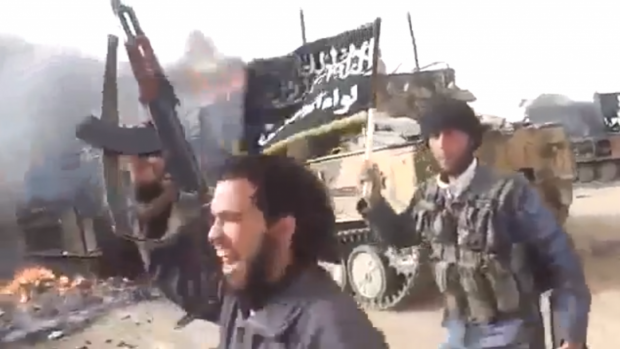 Obama is the biggest smuggler of guns to terrorists.

Daniel Greenfield, a Shillman Journalism Fellow at the Freedom Center, is a New York writer focusing on radical Islam.

You won’t find many of the Democrats who pulled their phony publicity stunt over gun control backing the Muslim Brotherhood Terrorist Designation Act. It was after all their very own administration that chose to sendF-16 fighter jets, not to mention other serious firepower, to the Muslim Brotherhood regime that ruled in Egypt before being overthrown by military intervention and popular protests.

Bravo another TRUTH that needs to be addressed!  I (we) the people are NOT the terrorists.  On another note, CAIR now assisting/protecting/defending the radical muslim family of the Orlando shooter and America tolerating that through no action by our “representatives” is disgusting!